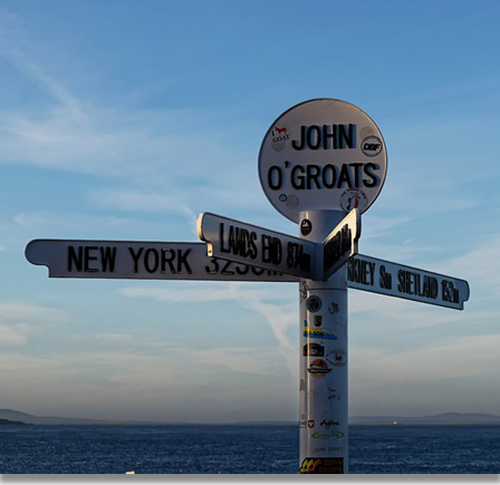 Besides being a computer programmer, you were first and foremost a traveller, a silent onlooker of people, a noter of bus and train times (I still have twenty booklets in the archive). The other girlfriends weren’t interested in this. I was your intelligent, shoulder-length-haired, brown-eyed, stocky, thirty something travelling companion. And so we got married. And when the children were born, they too became your traveling companions. It worked for a while.

After seven years in B, you got your job in Sussex, I joined you and we went backwards and forwards on the trains at weekends, weekending in B, our first home, and back to Lewes,  Sussex, our new home Sunday evenings, you pushing three year old, fair, ragtail  Rosie in her buggy up the gradient from the station;  seven year old, brown-haired Peter being given a lift on my bike as far as the exceptionally steep bit, then walking up, ‘drunk’ from sleeping on the train, and into bed, teeth uncleaned.

From Lewes to Wick by train in 1991.  In case you don’t know, readers, that is the North-eastern most point of the railway in Scotland. The aim was for Rosie to win British Rail ‘Children’s Traveller of the Year’ Award.

These are my memories of us as travelling companions during that epic journey: you playing tennis on Perth (or was it Inverness?) public courts with ten year old Peter and six year old Rosie (how on earth did we carry the tennis racquets in our rucksacks?); me on a bench, never having got over  Sam’s birth; Sam: 1 year 8 months old in buggy, me horrified, picking off nits between expert finger and thumb from the top of his almost hairless scalp. This was the year of the head lice in Lewes. What! Him too?

Sam, unable to talk, screaming the café down at John O’Groats harbour: Peter and Rosie have taken knives and forks – and he’s late to talk and can’t ask for a set. The boat, rocking in six -oot waves: mini-companion Rosie, terrified, sick everywhere. Peter, brave as the apostle.

Kirkwall, capital of Orkney Islands: grey-washed bed and breakfast in Main Street. Me: no energy, shivering on a beach in a winter wind while you explore with your mini-companions. I buy a winter-thick, Campbell blue-green kilt and a green Fair Isle jumper and wrap myself in them for the rest of this ‘summer’ holiday.

We arrive on a coach tour at Skara Brae, the pre-historic village. Half a mile to walk. Me: not going, but I struggle there, tearfully, to the toilet. You, elated at Rosie’s fascination by this ancient sunken village. You decide then that she is going to do a History degree. Readers, she did.

Back to the mainland. I’m deteriorating: hard to get up the hill to the Youth Hostel at Perth. You get lumbered with two rucksacks.

Train journey along Loch Ness to Glasgow. No monster. This head-scarf-covered companion has the worst ear ache of her life. Short train journey to my godmother’s at Dumfries. Piercing ear-ache. ‘Have you tried a hot water bottle’, enquires the landlady of the square white boarding house? It works.

Back over the border to England. Carlisle: Spent by a stroll to the red castle, I, recumbent on a bench at the station while we wait for friends to divest us of one companion, Peter, to the Lake District for a week. Station inspector, ‘What are you doing here? Are you a tramp?’ What have we come to?

Rosie did win the Children’s rail competition. It took a while for me to get well again.

We played A Happy Family, until the children one by one reached the age of nine and refused to play…