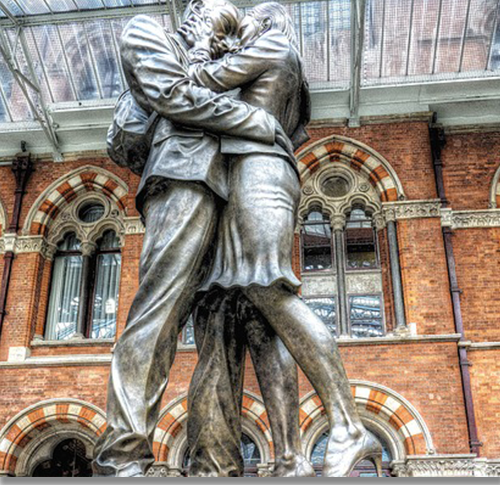 St Pancras Midland Railway Station – ‘the place that holds all’, conjures up a sense of excitement because it was upstairs in that shabby palace – at a very grubby Platform 4, that we arrived when my mother took me from Leicester to London, aged 14, to the House of Commons.

Through there I was allowed to go alone and on through London to Worthing to my grandmother’s at the age of 16.

Now, since 2007 with polished tiled floors, re-cleaned red brickwork, and a re-opened hotel, the railway station has blossomed phoenix-like to life. Platforms 3 and 4 have been cut away to make a gallery. Only the pub, the Betjeman Arms remains as it was before – and the toilets in there are still in the same place! The dark panelled ticket office where I used to stand when I first started to commute to Bedford in my early thirties is gone and incorporated into the St Pancras Grand restaurant.

There’s the solid statue, complete with coat tails and shopping bag, of Sir John Betjeman who fought so hard to save this station from demolition in the 1960s and 70s, gazing up at the roof. And along the floor I can trace the slate disks, hand-inscribed with his exciting train poetry:

A misty sea line meets the wash of air…

The renovation comes at a social cost. Where is that grey, Irish BigIssue seller whom I used to chat to in the old tunnel outside when I first started to commute back into London fifteen years ago? Banished to nearby Camden Housing Estates? Dead?

Now I on my daily commute from university rush into the new extension at the side through the great glass opening, past what was my favourite deli, the ‘Sourced Market’. It’s always going upmarket, no longer selling gluten-free bread or carrots, just concentrating on outrageously priced pressed juices and delicate cakes. Now, for me, it’s better to have bond in the Market than to buy their produce.

I turn into the old ground floor basement where the arches used to house Bass beer barrels from Burton intended for the nineteenth century London populace. Here now there’s almost as much people noise as back then. Under the red brick pointy arches with their careful sandstone borders are chic shops including Joules where I, never a lover of shopping, can dive in and buy my summer season’s China-made clothing in the space of minutes counted on one hand.

A great squeaking of the wheels and long rumbling and that’s the last Eurostar of the evening gone: I can no longer go to Paris now you are ill. I rise in the lift to my train; beautiful rhythmic notes waft loudly up from the piano given by Elton John.  Tonight it’s a middle-aged swarthy guy with a beard playing a Schubert Sonata. All can play this piano, so it is a leveller. You [husband] are in an induced coma, but I can still feel a pitcher of pleasure from this music. My tummy and forehead both tighten in pain and then relax a little.

I run past AMT Espresso to the East Midlands ticket barrier. It’s raining torrents outside. There’s an outsize builder’s bucket on the floor. The builders didn’t manage to join the flat roof of the extension quite flush with the grand old Victorian girders!