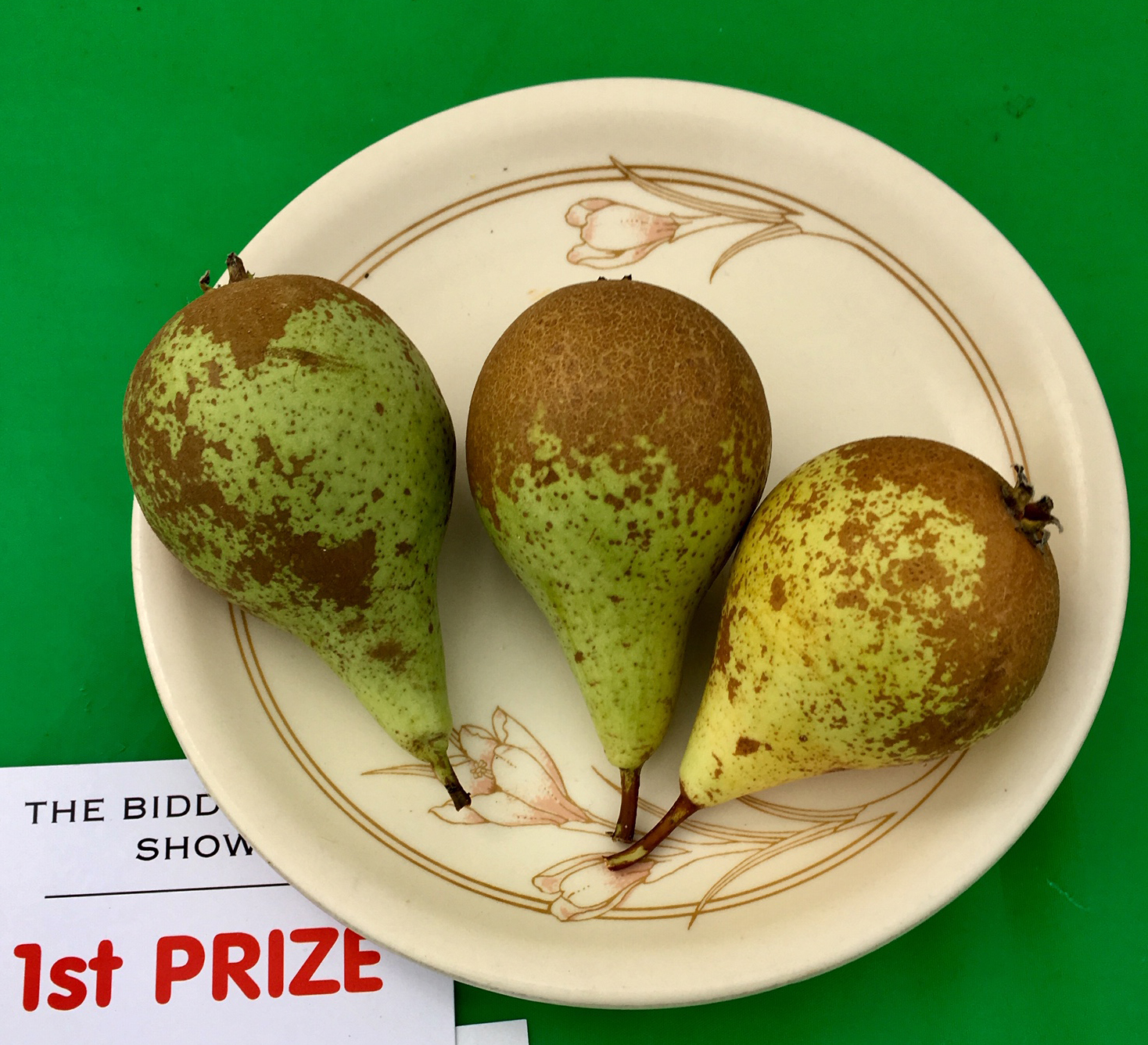 A friend wants all my grey-brown spent poppy stems and elegant seed-heads, even those now covered by sooty black mould. ‘Is it for opium production?’ I ask. Her husband says they don’t tend to go in for that very often. She wants them for making wreathes – wreathes for weddings apparently, not for funerals.

Plenty of prizes won at last Sunday’s local village show: my pears came FIRST, despite my thinking their mingy-ness would count against them. All a bit of fun, really. This year, after winning last year’s silver plate for best fruit in the show for my grapes, I decided to enter a variety of fruits and veg. My purple grapes from my hot redbrick garden wall came SECOND. The ‘FIRST’ was clearly from a grower with their vine inside a conservatory.  It was quite a task to get fruit to ripen in time: summer pruning of leaves and trailing shoots to allow them to be kissed by sunshine, destruction of any second competing bunch on each branch, weekly watering with two buckets of rain water and added SM3 sea weed solution. Vines have deep roots and are thirsty and hungry creatures.

My flavoursome Second Early potatoes came SECOND. My courgettes, seed proffered by a Bengali-speaking neighbour speaking only the word ‘This’, came THIRD. There was an amusing little notice on the ticket ‘rather large!’ I can’t control the size if I only visit the allotment once a week. My tiny sweet toms that I barely watered came nowhere. They are still giving.

I am fed up with the works going on at our railway bridge. Why does it have to take nine months? BT Openreach worked at night and weekends to reroute their services. Cadent replacing solid iron pipes with plastic ones are working only during the week, as are Murphy making the temporary footbridge. And we still have gas to come before the destruction of the centre of the bridge in order to raise it can take place.

I continue to cycle over on the pavement, and get off for pedestrians. Two obedient walking-cyclists in shorts (who don’t have to cross four or six times a day) shout ‘ “Cyclists dismount.” Can’t you read?’ I tell them that the notice says ‘Please’.

Bicycle stolen from the porch at Waterstone’s, Bedford, just before closing. Went to ask them if they had some memoirs in stock for my next course – they hadn’t – and turned my head towards my phone for half a minute. A sad reflection of the times that people make stealing their career. When I was at grammar school, we knew no locks. Our masters forced us to park in a cycle rack five minutes walk from the school entrance, unseen near the road beyond a wood.

Two inches of rain in my bucket after the week. Quite warm downpours, clouds sailing across the Atlantic from the Caribbean.  Far from killing the cucumbers climbing the grape vine, I have picked three prickly, ridged mini-fruits in as many days. Nothing like a crunchy cucumber that’s not been grown hydroponically.

Gain some, lose some. Much of the fruit of cooking apple tree is sick. Too many codling moth grubs have entered the apples and there is an invasion of brown rots spores – We are pruning the tree, though early – to let air circulate, but we don’t stand much chance of winning the war when neighbours on two sides of the wall don’t prune theirs. I’ve put a reminder in my phone to buy pheromone traps in early spring.

Dismayed that the storm brought down the splendid array of green-yellow Greensleaves eaters.  The sudden moisture being taken up by the tree roots had split them from top to bottom. We salvaged and slow-baked the halves with cinnamon and cloves.