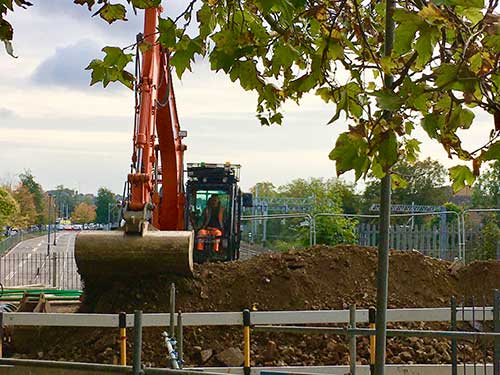 A Visit to Bromham Mill, Bedfordshire Collecting Leaves for Compost

I am an early visitor for lunch at the water mill cafe, but later plenty of people despite the chilliness. I am disappointed that there’s no access to the building over the gushing tide of the mill gate where first Granddaughter kept running excitedly in April 2016, mini-screaming, ‘Want more noisy water’. Local artworks for sale has replaced the snakeskins and small stuffed mammals of the museum room: a travesty. How will little children learn about them?

Outside: the River Ouse, bordered by tall grasses is, surprisingly, after last week’s great downfall, low and calm; the willows still green, their tiny, slender leaves holding; a single swan dipping its head. Underfoot, brown rotting poplar leaf hearts, no longer loved, squelchy, make the children’s play area dangerous to all but intrepid, older kids. Ahead, a beautiful brown circle at its foot surrounds a perfectly symmetrical gold-brown oak. Too beautiful to ruin, and the layer of leaves is in any case thin. At the end of the grey yellow field with its spent grass, yellow leaves still linger on the limes bordering the small brook.

I continue over the stile into the broad church field and up the slight hill. Invasive, stray sycamores border the path, the ground below submerged in large, dry crunchy-brown, pointy, armoured leaves. I bend and open my (plastic) sack. They take longer to rot, but there is an abundance of them.

On Cranes and Moths

If my tiny new-born granddaughter were a year older, she would be interested in the tall-as-the-Empire-State-building crane at the demolished railway bridge near our home. ‘What’s that red flashing light?’ I thought the other night. ‘Is it a drone over the prison?’ But it was the crane. While the bridge is closed we have a ‘paper’ pedestrian bridge to walk over. The main road to town is still, only footfall, as it was when people used to walk home with their shopping when I first bought my home forty years ago. Come next spring, I suppose the grinding 1000 vehicle movements an hour will re-begin, and I’ll have to keep my window tight shut even in the hottest weather. How short-sighted that the council is not doing free cycling training, and hasn’t insisted on Network Rail installing a cycle track over the new yet-to-be-built, slightly higher bridge. The bridge is to allow the Thames link electric trains to travel on to Kettering and Corby – to rejuvenate Corby as a commuter town, I think?

On moths: clothes variety. Their ‘cased’ white offspring have ruined three patches of rarely hoovered carpet behind tables and settee in my sitting room this summer. The encased creatures look almost like a seed. When in June I became wise to what was happening, and purchased pheromone traps to lure the males (fifty-four males were well and truly stuck on to the sticky pads) it was too late. They had been spotted in 2018, but I was ignorant – they will eat a fourteen-year-old, seventy-five per cent polyester carpet. My drawers and the piano felt are protected with lavender flowers.
These moths have also been abundant in the London flat, refurbished with a wool carpet two years ago: seventy-two males caught on traps and many more caught by my son’s quick-fingered fiancée. No visible damage to carpets – yet. But son, over from Hong Kong, left his once-worn, sweaty M and S T-shirt on top of his luggage during a six-day jaunt to Bedford and Matlock Bath, and upon return to the flat, it had been eaten in the shape of a line of pearls.

A small brown moth flew out of my ancient glass-fronted teak veneer bookcase straight into my face as late into the season as 9th October. That was the first piece of furniture my parents allowed me to buy alone. It will have to go. Perhaps they liked the (maybe animal-based?) glue on some of my late husband’s stamps, or on the bookcase itself? Then there was my bra, with a line of holes and a wiggly white thing on it – it went straight into the bin. That was creepy. I have extremely reluctantly used a permethrin-type spray round the edges of the carpets, and now I put wool jumpers and blankets by rotation in a bag in the freezer.

It was with shock I discovered we are very probably to be built around 150 houses, then in all likelihood another 500. And these homes in all likelihood will bring more cars to the main road. The ones built thus far are twentieth century type detached homes without solar panels or ecological sewage systems, not fit for a climate emergency. It is no good the government forcing out-of-London communities to host more homes, when every Sultan, Sultana, Ivanov and Ivanova with money to donate to the Conservatives can buy large homes in London Boroughs beginning with for a start K, W and B. I shouldn’t be talking, the reader will say, as I have a second property, but I do share it with friends in need. I ordered a copy of ‘Small Town Sustainability’ via Amazon. Ironic that it came both shrink wrapped, and wrapped in plastic packaging.

Have just joined the Beds Bat Group. I want to know more about these winged mammals, which glide around me at head height on warm, late allotment-spent summer evenings. They don’t visit my garden, but they do visit others on the north of our crescent and I wonder what the difference is. Lack of insects? But I have midges hatching in the water tanks and buddlea-loving butterflies.