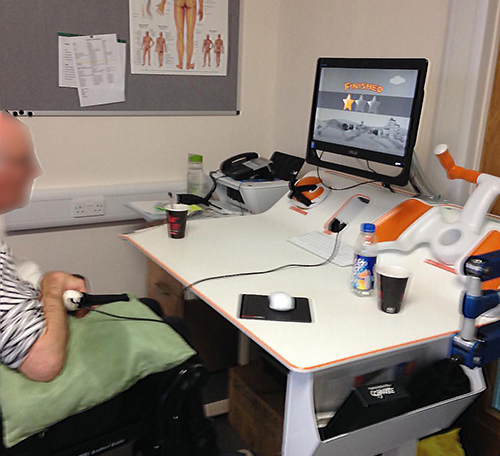 I have written this list of equipment used in the care of a stroke patient, because it is not currently possible to get all these things from one source such as the completecare.co.uk catalogue.

This Danish equipment allows a single carer to turn the patient in bed with no manual handling and no slide sheet. It uses sheets on a roller and buttons. This was fastened to the bed which had a pressure-relieving mattress. Both were supplied by the NHS.

This is the width of a physio bed and the patient can be hoisted on to it and tied at the ankle and knees and shoulders with a specially made strap. The carer presses a button and the patient is raised to 40% or 60%. This equipment is German. Supplied by the NHS.

for use from wheelchair. Electricity starts user, whose feet and calves are strapped in, off cycling. User sees which of his/her legs are going strongest on 7 “ square screen. The bike cost in the thousands.

costing in the thousands – for the legs. It makes the muscles contract. They are stimulated and can then pedal the exercise bike themselves. As they get used, should stop wasting away, which in turn is good for the blood circulation in the legs. The equipment can also be used for the arms, but was not initially used for A.’s arms, as they suffered from grade 4 spasticity. Training in using it was given to us at home. The FES unit was used in conjunction with wheelchair cycling.

Unfortunately you have to be really good at bending down round the person’s legs in order to operate it. And you need more space than we had in our hall although it was roomy. I managed to break one of four tiny wires that are attached to sticky pads on one of the legs, and then the whole thing would not work until we bought a whole new set. Other carers might be less clumsy than me!

Later a smaller cheaper Intellisim functional electrical stimulation set was bought for the stationary arms. The idea is that the tiny electric shock will stimulate the brain. It’s a bit like a TENS machine. Our Physiofunction physio supplied this to us.

Molift battery-operated take-apart hoist was bought for use when carers took A. to physio and he had to be hoisted into sitting position or lying position onto a physio bench – the two pieces just fitted in front of the front seat the Renault Kangoo WAV.

Easystand Standing frame with ‘hammock seat’: This was purchased after A had been at home over a year and his leg muscles and postural muscles were getting stronger. The hardest thing about using this expensive device was taking the wheelchair armrests off when we carers used it, and putting them back on afterwards, though I oiled them. This was necessary in order to reach-slide the hammock under A’s bottom. The hammock was then hooked on to the device each side. The hammock went up when a handle was pulled by one of the carers. A’s arms rested on a high ‘shelf’. We attached attractive visual things such as bus tickets (!)  – he was an extreme collector – to the top of our curtains to encourage him to hold his head and shoulders up straight. There was nothing behind him – unlike when using the tilt table so we had three of us carers on duty when using it.

Gym equipment. Pulley attached to wall. Active Hands wrist holds are used to attach wrists because the user cannot grip the holds of the pulley rope themselves. Prior to this the insides of A’s elbows were massaged to open the elbows as much as possible and warm the joints up – get the synovial fluid moving.  A carer with a massage qualification was doing this. Then A’s arms were stretched alternately with the pulley.   A carer used it on Saturday mornings before we went out. It would have been nice to use it every morning, but it was in the gym rather than the bedroom – and the slot wasn’t long enough before lunch.

The door had to be adapted so that an automatic electrical arm was attached to it. Carers entering used a keypad on the outside. The portable door-opening pad was used by A. himself. He loved squeezing it, but could open the door and close it at will from his bedroom, without knowing who was at the front door, so we had to keep it out in the hallway! It was intended to give him a measure of symbolic independence and control.

Similar devices are available for switching a TV on, but we didn’t purchase one, because A. had never been an avid TV viewer.

Page-turner  – The carer sets ten pages of a chosen book in the teeth of the machine (which we bought online from the USA). This sits upon the top of bed on a music-like stand. It was controlled by a big press-button that A., with limited hand movement, could squeeze.

Equipment specially made by a representative of the Remap charity.

From Remap, A wide frame to hold a music stand-like device to go across whole bed from side bar to bar to facilitate reading of a map and the holding up of an iPad/tablet at a good angle. The commercial book rests weren’t much good.

To hold the I-pad on to the wheelchair table for reading. A. could not then touch any keys as he could not reach that high, but he could read the text.

Electrically heated cosy foot warmer – for the evenings when sitting still in the chair– didn’t really work – massage by carer’s hand was better.

Equipment considered and not bought

Not purchased because of lack of space – Neater Eater. The user presses a large button and spoon takes food from a large plate with a solid rim and comes up to the user’s mouth. Plate revolves. Disadvantage: Food has to be cut to correct size by carer. Advantage: User no longer has to be spoon-fed. Some independence.