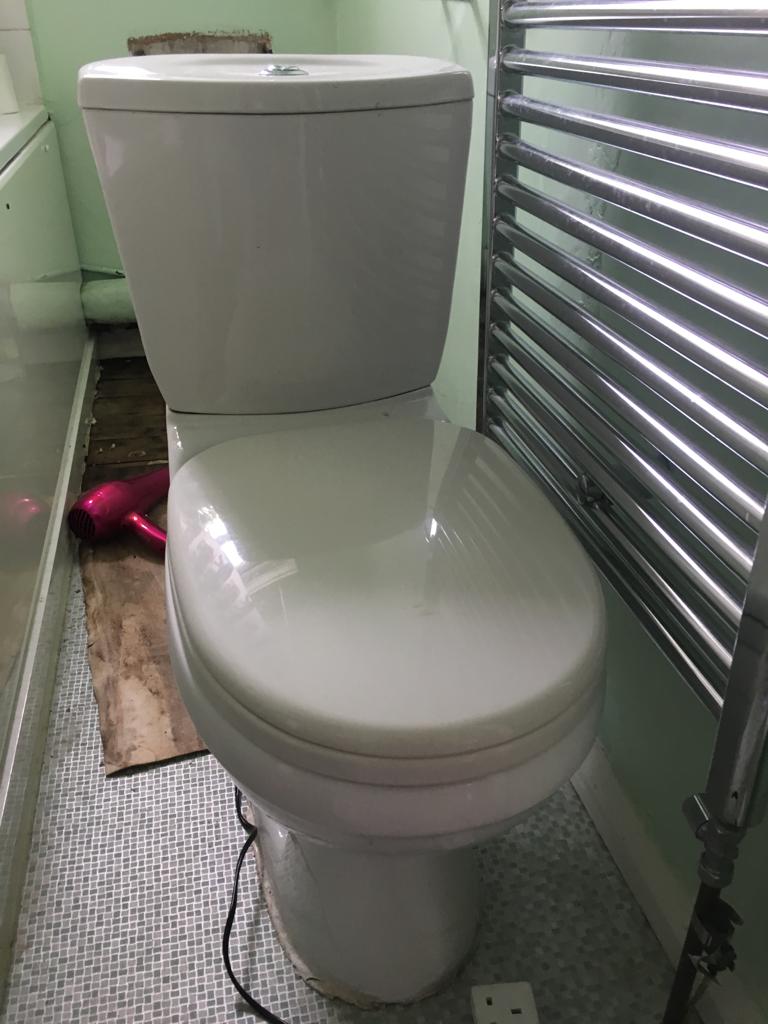 Slight leak in toilet the day after my dear plumber of some ten years moves out of London.

A plumber (from a ‘shark’ company claiming a local address that charges £85/hour) is going to fetch a new toilet.

‘It was stuck with mastick, you’re always going to have trouble where it joins the elbow. You really need a new one. They’re supposed to fit flush’.

Deafening rap on door. There has ensued a flood of ark-like proportions in which the bathroom light fitting of the flat below has transformed into a spring. Said plumber didn’t turn the screw in the feeder pipe off correctly. Lie on floor with bowl, towel and hairdryer for fifteen minutes. Neighbour, cooling down, knocks again to announce that it’s stopped and helps to turn the nut in the pipe off with a piece of my late husband’s screwdriver collection.

All done. Was charged for two and a half hours. And the toilet which has the most flimsy of lids. Perhaps he did another job in the one and a quarter hours he was gone? Many towels to wash and dry. Floor filthy after.

Ring Islington Council at 9 a.m. to ask to take it away – but this has to be done and paid for online. Difficulty changing password, which I had forgotten. They will come Saturday.

Fri pm. toilet gone from street. Talk to old neighbour about it on phone. She says she’s had a bad day: the painter’s working on the next block on a ‘cherry-picker’ making a groaning motor noise and, to cap it all, she had to ring the council to take away a toilet she found in the street. I howl with laughter. I ring council to cancel Saturday’s collection.

Operator, ‘You know you can’t get a refund? ‘Yes, I just don’t want your people to have a wasted drive around.’

Never mind the non-refundable £30 I paid the council.

Returning to St Pancras on bicycle: Notice new rent-a-bikes: lime-coloured, not docked to any racks, almost blocking the pedestrian crossing at Tufnell Park. Good luck to them. I expect they work via GPS. Last November the Borough Yuen Long in the Hong Kong ‘New Territories’ was littered with bicycle carcasses yellow, red and green from three Internet hire out companies. I wondered why Yuen Long didn’t employ scrap merchants (of whom there seemed to be many) to collect them up.

Bearded, just 30 something, helmetless Dad on a black shopper in Kentish Town Road with two year old on a plastic seat. I used to cycle with my first round Bedford and London. (In fact he was almost delivered from a cycle, but there was less traffic then). Father does not raise arm and only puts three fingers out when turning right across the traffic.

Warning sign tells me to keep under 20 mph in front of the St Pancras Hospital. If it comes on for me doing 12 mph down the hill, it must illuminate for every horse-drawn cart, romany caravan, camel ..

Carpet of daisies under the centenarian limes at St Pancras Old Church. Desisted from stopping to photograph the daisies as felt big heavy plops of rain.

Many steam rollers – I mean motor rollers (steam rollers were what we had when we were kids) – scores of navvies and lots of smelly tar before St Pancras. When the spanking cycle tracks are finished, Camden Council will have made Pancras Road fast and safe for us cyclists and slower for the motor vehicles… would that all councils were as keen on cyclists as Camden is!

I could have photographed the daisies: no more rain, and missed train: I am reading my emails upstairs in front of the ticket machine and my rail card ran out yesterday: I must go down in the lift again to buy the card.