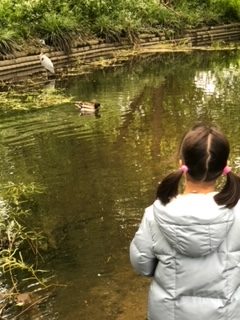 Forty-six male clothes moths have ended their lives on sticky traps this season in a single room of the London pied-à-terre. The property being deserted during the lockdown can’t have helped. I left the London flat on Wednesday last week in the usual pouring rain to return to Bedford via St P., careful to go downstairs with my cycle bag, and an ‘archaeological find’ from the mending drawer: a card of clothes moth grub eaten wool. Wouldn’t it be wonderful if this wool card were the final source of the tiny flying creatures and if their offspring aren’t really eating my wool carpet? (Thank goodness we didn’t have this problem when I was nursing my husband).

The amount spent on traps, lavender oil in drawers and spray (traditional and less traditional) has mounted, so I recently asked a pest control company the cost to treat the carpet/flat. With the amount quoted, I could buy two new cheap polyester carpets (if I wanted).

I’m pedalling at the side of St Pancras Station in the ark-like rain and there’s a council lorry in the taxi lane, pumping out a blocked drain. The stench is like that of a hundred dead bodies. How much COVID 19 is in there, I wonder?

I’m slowing down at the huge automatic glass doors at St P. when I realise I’ve forgotten my mask. Is this a six-month silly blip? Am I becoming complacent? Thameslink generously gave out masks when they became compulsory in July, but I doubt they do now.

‘What shall I do?’ I ask the gate attendant.  ‘I don’t want to cycle twenty minutes back in the downpour. Do you know where I can buy one?’

The Boots security guy points to the masks on a stand at the very front of the store and looks after my bicycle. The store is obviously used to silly people like me.

In the train carriage are six passengers, Mill Hill and Radlett-bound, with their masks round their chins, or under their noses.

I do a cycle ride with my friend S, he to exercise and I to pick sloes. We go off road via the river to Cople, and there are the sloes aplenty that will freeze for my winter venison stews. Road to Cardington, then the old railway track at Harrowden, (where a sudden downpour) and along the Elstow Brook. In my forty years in Bedford, I had never cycled here. It is famous in my memory for a son of mine being sent there to measure the flow for Geography GCSE. The following week he truanted, returning there to help a friend who’d been away from school. I caught him because he arrived home wearing a woolly hat that I knew he wouldn’t have had time to buy after school.

Ten days of misery and wrath

BT put all their customers ‘on a new and better’ plan in August. They have been back-charging me through the nose for a handful of calls made to mobiles at the beginning of June. Travelling back from a happy visit on 29 May to Brookmill Park nature reserve in London teeming with flounder and populated by eels, I was nervous and had lost my rucksack with mobile at West Hampstead Station. (Said son and granddaughter also happened to be visiting).

I asked BT why my bill was so high, and they refused to help because I had forgotten a password allocated me in 2016. The first guy I spoke to said he’d send me it. The fourth guy (eight days later) said he’d send me it too. I received two letters the same day. One was second-class and contained the words, ‘Here is your password’, followed by a blank (yes, really!). The second was first class and said, ‘Here is your password’, followed by the password. (Hurrah!)

After waiting on the line for 60 minutes, I was able to cancel my contract. The least I’d waited to speak to an operator was fifteen minutes. The price for using 14713 is overblown. An individual who can’t remember their password is a non-entity. If I ring my bank and forget my password (which I don’t, as I choose it myself), there’s an alternative way of identifying me. I’ll let you know how I get on with Zen.

On Thursday Thameslink Lost Property emailed that they had received my rucksack, with rail card and mobile phone from West Hampstead Station on 7th October.  Of course, I bought a new mobile ages ago.

Yours truly became happy and hyper during the lockdown planting three fruit trees: plum, peach, quince, a new asparagus bed, fennel and beets. The chicory, lambs lettuce and chard did well. The strawberry crop failed through drought, but the currants, gooseberries and raspberries were big as marbles and abundant. The cooking apple and grape harvest is finished (many of the apples spoiled by brown rot introduced in the cores by codling moths). The opening of the heavens with two months’ rain in three days has done for the productive squashes. A goodly number are drying – to be eaten when the Brexit food crisis hits. Now for covering the soil with weed suppressant cardboard or fabric, feeding the vine, pruning the cooking apple and spraying against brown rot. I’ve tried for several years to no avail raking up and burning leaves and digging over the soil.

Now plodding on with the writing. Finding some cafes with covered outdoor spaces in which to think and jot things down has been a help: too much distraction at home. Leaving the mobile behind is essential too. I’m working on reducing the length of the memoir of my carer years. I’ve found many surplus words. To make it easier to follow, I’m collapsing some incidents such as two visits to a prospective hospital, into one. Some characters may have to be collapsed into one too. Believe it or not, the arrival of dark windy autumn weather sparks off memories of what my brain-injured husband and I did in autumn.